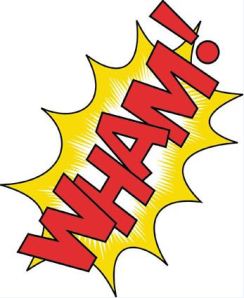 Last week, I got a big cut on my hand that required two Disney band-aids. How did I cut myself? Turning off the lights. Yes, I managed to hurt myself on a light switch. While I was trying to stop the bleeding, I started thinking about other ways in which I injured myself over the years. Ways that most people would consider…unnatural.

– When I was in second grade I saw my teacher accidentally staple her finger. I wondered if it hurt. So I put my finger under the stapler and slammed down hard on it. Too hard. I had to use a pair of pliers to pull the staple out of my pointer finger. Final analysis: Pain

– As a stupid 6 year old wandering around in the woods, I wondered if it would hurt to head-butt a rock. Since it was a big rock, I figured only a little head-butt would be needed. Well, I rocked my brain up against the inside of my skull pretty good. The rock felt no pain. I was not so lucky.

– Tried to run around a bookcase, but accidentally went through it. Another head injury.

– My uncle had an electric fence. I thought if I put a balloon on my finger and touched the fence, I would be shock proof and it wouldn’t hurt.  The first 7 attempts ended up with me waking up on the ground.  So I decided instead of trying to be shock proof, I would absorb all the electricity in the fence to get super electric powers!!! After 15 more attempts, my right arm went numb and hung useless at my side for the rest of the day.

Time to go change my bandages…

Movies + Video Games = The Jumpmen Podcast
View all posts by jumpmenpodcast →
This entry was posted in Uncategorized. Bookmark the permalink.